Important rules for feeding a baby

Learn about the general rules for feeding a baby, when and how do you start feeding? All of these questions will be answered below:

Feeding an infant is an easy and enjoyable task, whether it is breastfeeding or artificial feeding, provided that this feeding meets the following two conditions:

1. To provide the child with his sufficient nutritional need, which includes the sufficient amount of thermal hairs necessary for movement, body temperature, and the necessary elements for his growth, development, and the functioning of his body systems.

In order to feed the child well, it is not enough to learn ready-made methods for feeding with specific numbers for each food item that the child needs. All these things are now studied and known by nutritionists, but we must learn how to watch the child, and know that he needs food without asking us. This, he cannot speak to express his need, and thus we fulfill his desires and do not impose on him food within specific hours and in quantities that may not be sufficient for his needs. But on the other hand, the feeding does not become unbalanced, random and tiring for the mother and her child. And now we explain some simple nutritional rules that can help you, no matter how you eat (natural or artificial).

The newborn child knows breastfeeding instinctively since his birth. If he is placed near the breast, he can raise his head and feel the nipple with his nose and lips, then put it in his mouth and start sucking it in order to breastfeed. This instinctive reflex is present from the beginning of birth, so we must not hinder it. Finally, the newborn child knows his nutritional needs from the first feeding, so let him breastfeed the appropriate amount of milk for him.

2. Feeding according to the demand of the newborn:

Every child is a living creature that has its own nature and is different from the rest of the children. There are children who are calm and others who are nervous. There are children who are obese and others who are less in weight. Children cry and ask for food most of the time and others tend to sleep and cry less. We cannot impose one feeding program with the same dates and the same portions for completely different children, but it is possible to start the feeding program according to the demand of the newborn child:

Do not wake your baby by giving him the feed and wait for him to wake up and ask for milk (in case the baby is not premature, of normal weight, and in good health).

Do not force him to take more milk than he needs by giving him the breast after he refuses, or force him to fill the bottle of milk in the case of formula feeding. Let him take the amount that suits him and that he wants, and know that sometimes he breastfeeds in much smaller quantities.

After several days, try to find an initial system for meals, with a period of between two and a half to three hours between them, which is the time needed to digest the meal. And to know that your child may cry for something other than hunger, it may be thirst, fatigue, the heat of the weather, desire to pet parents, or the need to change sanitary pads. It is also important to know and respect his sleep times.

Night meals: As we talked about before, the newborn child does not have any food reserves at first and does not tolerate long periods of hunger during the night that lasts from six to eight hours, so do not refuse to breastfeed him at night, and on the other hand, do not make it day and night and you have to try to make a regimen His sleep is consistent with the family sleep regime during a period of time that may be long and up to eight weeks, so you have to be patient and gentle with your child until he gets used to the family sleep regime.

3. How do you know the proper nutrition for your child:

The best practical test to know that the meal is sufficient and that the child is feeding well is to watch him immediately after the meal, where he sleeps calmly and his limbs are completely relaxed and his breathing is not disturbed if the feeding is good.

The period of sleep extends from two and a half to three hours.

The other way to monitor the child’s nutrition is his weekly weight, where his weight naturally increases by 150-200 g every week during the first three months of his life and then the rate of weight gain decreases in the following months. 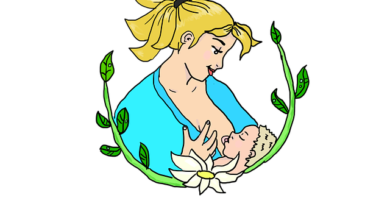